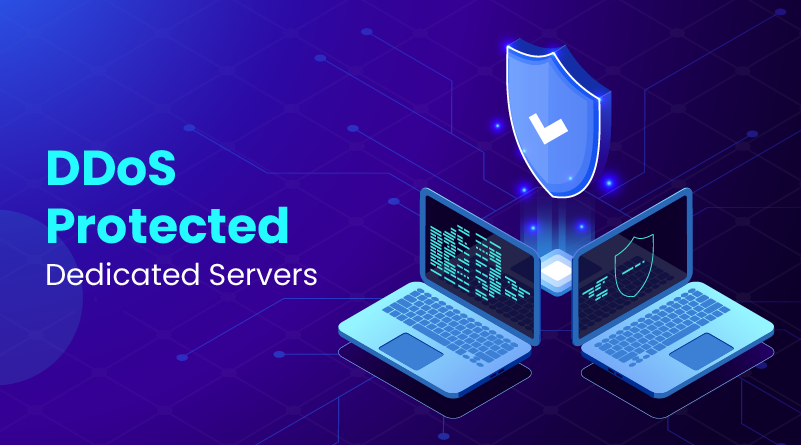 A dedicated server allows you to access the entire server for your application, websites, and business – all to yourself. However, the security of dedicated servers is a real concern for the owners nowadays and one major threat is DDoS attacks. This attack has a major impact on the companies dependent on the internet for their business and production work. Many famous websites like Yahoo experienced a DDoS attack in early 2000.

A DDoS attacker can degrade the quality of the dedicated server or fully break down the network connectivity of the victim. The main intention of a DDoS attack is to make the user of that server partially or unable the use resources like CPU, RAM, storage, and other network resources.

This article illustrates some safe practices for protecting your website from a DDoS attack.

Related: How To Pick The Right Dedicated Server Specs?

What Is A DDoS attack?

A distributed denial-of-service (DDoS) attack is an evil attempt to disturb the normal functioning of a targeted dedicated server. This attack spoils the normal traffic, network, or service by overwhelming the target or its surrounding infrastructure with a flood of internet traffic. DDoS attacks become successful by using many compromised or unprotected computer or server systems as sources of attack traffic. To be more precise, a DDoS attack is simply like an unexpected traffic jam caused by unreal users to prevent authentic users to reach their destination, your application, or website.

How To Identify A DDoS Attack?

DDoS attacks have some common symptoms. The most common symptom is an application or website suddenly becoming unavailable or extremely slow. However, it can be caused by a legitimate spike in traffic during peak hours of your dedicated server. It is advised to use traffic analytics tools to spot some common signs of a DDoS attack:

Related: Do You Really Know Everything About The DDoS Attack?

The DDoS attack is launched to attack the victim server in the following forms:

The attackers scan the network to find the most vulnerable machines and then those machines are used as agents by the attacker. Attackers compromise the security of the hosts to launch DDoS attacks using spoofed IP addresses, which makes it difficult to trace the attack source.

Many variations of DDoS attacks are sprouting the whole cloud network of dedicated servers. Two major types are related to bandwidth and resources. Depending upon the exploited vulnerability the DDoS attack can be further divided into different types.

Some common examples are:

What Is A DDoS-Protected Dedicated Server?

Various countermeasures have been adopted and still emerging to protect dedicated servers from a DDoS attack. Most DDoS attacks are caused by an intruder attempting to make unauthorized access to the victim’s dedicated server. Some common DDoS protection mechanisms are discussed below:

Prevention Techniques: Prevention is always better than cure! The same concept applies to the method of protecting the dedicated servers from DDoS attacks. One such method is to use filters, like:

Detection Techniques: This method helps the victim to avoid the spread of DDoS attacks and prevents the servers from crashing. The common methods are:

Response To Detection: In case your dedicated server is under a DDoS attack, the next task is to block the attack and the attacker should be traced to find out the attacker’s identity. It can be done in two ways, manually using ACL (Access Control List) or automatically.

Factors To Consider In Defense Mechanism

Before selecting desired DDoS solution for your dedicated server many things need to be considered; like:

Related: How To Pick The Right Dedicated Server Specs?

One major threat to the network used by e-commerce, e-communication, e-government, e-learning, and e-sport websites is a DDoS attack. This attack is at a constant rise in dedicated servers and cloud computing. This article provides a brief survey on DDoS attacks, their types, and various countermeasures like detection, prevention, and tolerance techniques to prevent the attacks. If you don’t have a dedicated IT resource team to do the same, it is recommended to host on a DDoS protected dedicated server.